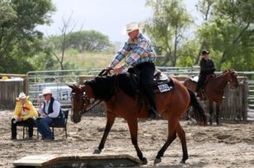 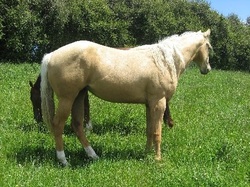 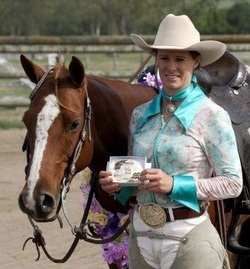 Sadly we lost Rose to Tetanus in August 2010 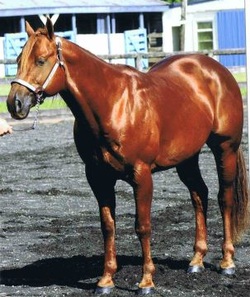 Senor Baron Q1357. 1999 Chestnut Gelding. Jolly Baron x Senorita
'Nerdy' is bred and owned by Lin-Bar Quarter Horses.He is by Jolly Baron (passed away at 32 years old) and out of Senorita. Jolly Baron (JB) was bred by Howard Pitzer in Nebraska and is a Grandson of the legendary Two Eyed Jack, the leading sire of AQHA Performance and Halter Champions in the entire Quarter Horse industry. Two Eyed Jack's progeny earned over 15,000 halter points and 21,000 performance points in USA. JB was first imported to Australia then was imported to New Zealand. He has been one of the most influential sires in New Zealand Quarter Horse breeding, he has sired many good Halter and Performance horses. He has produced winners in all events ranging from Cutting and Reining to Pleasure and Trail. All of his progeny have inherited is versatile ability and wonderful mind.

Senorita was bred and owned by Lin-Bar Quarter Horses and was a great mare in her time and a top producer of quality horses. She has been a very versatile dam by producing an AQHA-NZ Pleasure Futurity Winner, a NZRHA Reining Futurity Winner, and also a very successful jumping pony that was exported to Australia.
Senorita unfortunatly passed away when Nerdy was only 6 weeks old so he had to be handreared.

He started his show career as a yearling at Halter and under saddle as a 3 yr old.
Some of his achievements include, 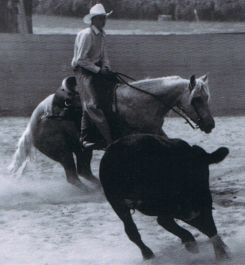 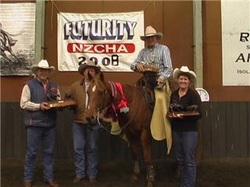 I'm Guna Cut. Q1894. 2004 Mare. Dualin Gun x Cotton Cutter
Ima was shown at Halter as a Yearling and had done a little bit of Western Performance showing as 2 and 3 year old.
She has been trained mainly for Cutting and was the winner of the 2008 NZCHA Open Cutting Futurity and also Non-Pro Futurity, then went on to win the 2009 Open Derby. In her 4 yr old year (08-09) she took Barry to win the NZCHA High Point Rookie title.
She was sold to Rosemary Haultain who had much success on her in the cutting arena and is now in the South Island with her new owner Tamsin Lines 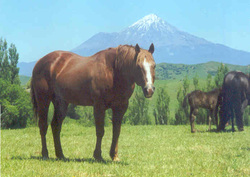 Jolly Baron - Imp USA - 1972 Chestnut Stallion - AQHA-NZ Q68 - AQHA 929798
'JB' was bred by Howard Pitzer in Nebraska. He has been a very successful sire in both Australia and New Zealand, siring many champion Halter and All-round Performance horses, that have inherited his good looks and wonderful mind.

Article by Holly Clanhan that appeared in America's Horse, 2003.
One Peach of a Kiwi
This New Zealand stallion is in his third decade as a sire.

When Linley and Barry Ladd came to Amarillo from New Zealand last summer to cheer on their son Jacob as he competed in the AQHA Youth World Cup, they were intrigued to hear that America's Horse would be doing periodic stories on outstanding "senior" horses.
We were equally interested to hear their story. It began 32 years ago on Howard Pitzer's ranch in Ericson, Nebraska, when as AQHA Champion named Baron Bell was bred to a daughter of Two Eyed Jack. Their offspring, a sorrel stallion named Jolly Baron, was born in 1972.
As a 2-year-old, "JB" was exported to Australia and entered the show ring. Before long, his duties turned to the breeding shed, and his progeny racked up points in halter, cutting, roping and trail. He has about 35 foals registered in the Australian Stud Book.
Three years later, he got another stamp on his passport when he was exported to New Zealand, where he has so far put about 60 babies into the New Zealand Stud Book. Both countries keep stud books that are separate from AQHA's main registry, but are approved by AQHA.
In New Zealand, the Jolly Baron horses made - and are still making - quite a name for themselves. Every year since 2001, his foals have been among the top four in the halter futurity at the New Zealand National Show. They've also placed well in reining and trail.
The Ladd's have owned JB since 1997, when he was semi-retired to their cattle and sheep farm in Taranaki, a region of New Zealand that runs along the west coast of the north island. There, he runs with a small band of mares. He was ridden lightly until last December, when he had a stroke that left him a little wobbly in his hindquarters.
In an e-mail updating us on his condition, the Ladd's wrote, "His mind is still very good as he herds his mares and gets exited if any new horses come into sight. He lopes up the hills and still tries to keep up with the other horses. We will wait and see what the future holds for him, but he is a pretty great age and cannot continue to live forever".
In the meantime, they'll have Jolly Baron foals to enjoy for some time yet. At least two of "his" mares are in foal, and the Ladd's anxiously await the arrival of those babies.
"All of his progeny that we have been fortunate enough to have trained carry is wonderful temperament, his trainability his inherited capacity to compete in a wide range of events" they wrote.


Sadly JB was put down in July 2004 at 32 years of age. He was buried at Lin-Bar Quarter Horses overlooking where he spent his last years of retirement. Right to the very end he didn't have an unsound joint in his body and was still as lively as ever, being the first one through the gate when moving paddock. He will be greatly missed but he will live on through his many foals that have all have his wonderful nature and ability. 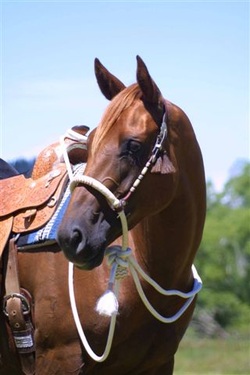 Top O The Class. Q1672. 2003 Gelding. Jolly Baron x Touch O Class
Sold to Denise Miller. Congratulations Denise on your successes with Top O The Class, winner in Pleasure, Trail and High Point Junior Horse awards. Now owned by the Carlisle Family and carrying on to be be a great show horse for the whole family 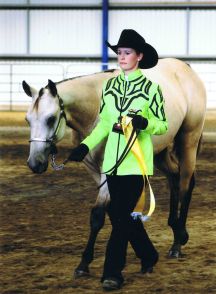 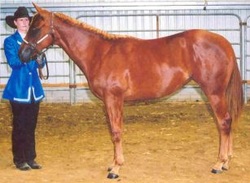 Lin-Bar Dipsey Belle Q1455. 2000 Chestnut Mare. Jolly Baron x Gina's Flit.
(Belle) is a full sister to Lin-Bar Jack, who has been very competitive in all performance events, especially Trail, Reining and Working Cowhorse. Belle was shown as a yearling and was placed 3rd in the 2002 AQHA-NZ Halter Futurity. During her first riden season as a 4 yr old, she has had placings in Trail, Reining and Working Cowhorse. Belle was the winner of the Open Reining at the 2005 NZCHA Futurity Show (Isola). 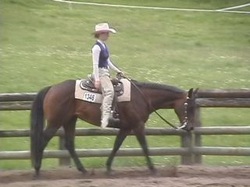 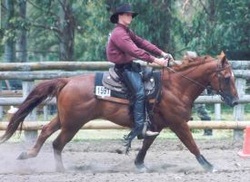 JB's Two Eyed Pride Q1095. 1998 Chestnut Gelding. Jolly Baron x Gina's Pride.
(Joe) has been a very competitive show horse and has competed successfully in all events from Halter to Reining. Jacob Ladd received High Point Senior Youth at the 2002 AQHA-NZ National Show riding Joe.
* AQHA-NZ Register of Merit - Western Pleasure, Hunter Under Saddle
He was sold to Cameron Heron who had much enjoyment out of him until they lost Joe to colic surgery complications. 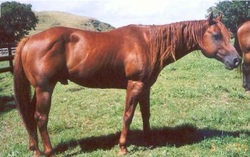 Grand Di Bar Q1038. 1997 Chestnut Stallion. Spot of Grand x Senorita. (Deceased)
(Grandi) was bred by Lin-Bar Quarter Horses but due to an injury he recieved as a foal was unable to be shown.
He was sold to Brian Gibbison where he stood at stud for a few years but unfortunately had to be put down due to his injury. 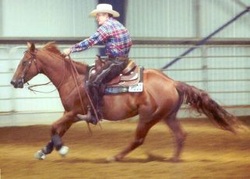 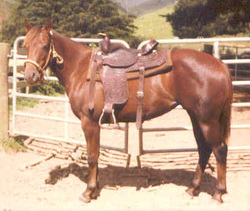